Vendetta is an evil green girl with the power to make fiends, both through stereotypical mad-scientist means and in the kitchen. She is the main antagonist/villainess of the series.

Vendetta spends her time torturing the other children and using her giant bear-like hamster, Grudge, to get what she wants. In fact, she runs the school completely because all the adults are afraid of her. She constantly tries to kill (or safe to say, destroy) Charlotte (whom she despises), but her schemes are always foiled by Charlotte's kind obliviousness. She only eats clams, beef jerky, grape punch and onions. She hates singing, vegetables, and happiness. Vendetta is Italian for "blood feud", and true to her name, she is vindictive and cruel. She speaks with a Bulgarian accent.

Most of the time, when Vendetta reads magazines, they are entitled "Spite", "Mean", "Evil", or "Grrr...". In eleventh web episode, inside the cat fiend's stomach, the magazine is entitled "Mad Cat" and has a picture of the giant cat's face.

Vendetta is lime green in color. She has two pigtails at the back of her hair, Vendetta is also seen wearing a green dress that reaches her knees, her eyeballs are close to a light chartreuse green, her tongue matches her body color.

Vendetta's parents, Violetta and Viktor, have both been shrunk down to an exceptionally tiny size and live in a hamster cage (apparently Grudge's before he was super-sized). Vendetta feeds them croûtons and beans, they seem not to notice the horror she brings on others, or simply disregard it. In the episode "Parentnapped" they became terrified of Charlotte. Though it doesn't say anything about them being afraid of Vendetta, it gives hints that they aren't aware of Clamburg being in terror. In fact, they state that Vendetta doesn't take them anywhere, which may be the reason.

Vendetta makes fiends through a process similar to baking, mixing together ingredients to form them. Vendetta seems to be the only one in Clamburg who knows how to make fiends, although in one episode Charlotte was able to make a friendly fiend without help from Vendetta. (Vendetta only gave her the ingredients.) Marion made a fiend to destroy Charlotte in "New Best Friend".

Vendetta gets her fiend recipes from a large green cookbook. The base ingredient is a colorless powder, or liquid, called fiend mix. Though Vendetta has been shown in episodes such as "Puppies! Puppies! Puppies!" to be able to make simple fiends from only fiend mix, more complicated ingredients are needed to make fiends with more potential. Another interesting point is that adding any ingredient that doesn't fit can make the fiend come out entirely wrong, as shown in the promo clip "Ralph" and in the segment "Parentnapped".

The crushing fiend that destroys anyone that it hears singing in "No Singing" was made with the following ingredients: Grape punch, three crunchy spiders, and a piece of toast. It came to life in the microwave, which could mean that some fiends are brought to life by being heated. Smash was also made of ingredients seen by viewers. These include a jarful of purple liquid (and the jar), a drop of fiend mix, a toy cymbal playing monkey, and a picture of Charlotte so he will only attack her and not backfire on Vendetta (which happened anyway).

Vendetta in the TV Series.

Another Vendetta in her TV design, creating a fiend.

Vendetta while making a fiend.

Vendetta in the web series.

Vendetta eating clam that is topped with ice cream. 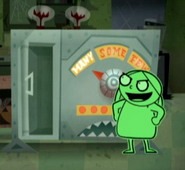 Vendetta and the fiend multiplier.

Vendetta eating an onion on a stick.

Vendetta singing mockingly as a sailor, only to trigger her fiend who crushes anyone who sings.

Vendetta angry at Charlotte when offered a flower in the intro.

Vendetta introduced in the intro, about to make a fiend. 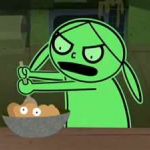 Vendetta mixing up and creating a Fiend.

Vendetta finding a piece of carrot in her casserole. 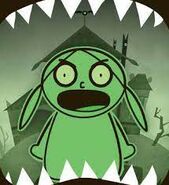 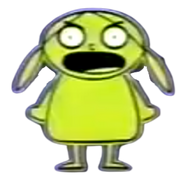 A picture of vendetta from the nicktoons bumper in 2016 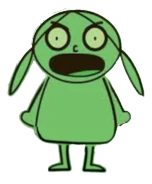