"I just know that we are going to best friends for ever and ever!"
—Charlotte to Vendetta[src]

Charlotte (Amy Winfrey) is a blue girl from Vermont, and the main protagonist/heroine in the series. She's generally oblivious and usually ends up destroying Vendetta's fiends without even trying. Plus, she thinks Vendetta is her friend.

Charlotte is light blue in color. She has a bow in her hair, she is only seen wearing blue dress and has light sky blue eyes, and her tongue is also a darker shade of blue.

Charlotte and her family originates from an unspecified town in the state of Vermont.[1] Her parents are supposedly astronauts on a space station, leaving Charlotte with her grandmother Charlene.[2]

On her first day at the school, she is fascinated by Vendetta, a green girl who Charlotte thinks is "nice" and has a "pretty name".[3] Charlotte believes she and Vendetta are best friends and does not realize that Vendetta hates her and tries to "destroy" her with fiends; monsters only Vendetta can make, which are the reason why everyone is afraid of her. Vendetta usually makes fiends to destroy Charlotte, but somehow Charlotte always finds a way to make the fiend friendly or do useful things. Charlotte is going to have to try harder to bring cheer and happiness back to Clamburg.

Charlotte attends Mu Elementary School in classroom four with Mr. Milk teaching.[1] She sits next to Marion, a nervous light blue girl. Charlotte's personality antagonizes Vendetta, and has even shown to be a danger to Clamburg in general in a few occasions.[4] Many scenes of her innocent antics are designed to provoke sympathy for anyone who is involved in the occasions, many times driving the victim to be horribly frightened.

Charlotte has a pet hamster named Buttons and a scissors fiend named Buttons 2.[5] Charlotte's grandmother Charlene is just like her, only older. They are both always happy and see everything as friendly.

Charlotte could be described as too friendly; it is nearly impossible for her to get angry as she sees everything as friendly and kind. She is very naive and believes Vendetta is her best friend. Vendetta is extremely annoyed by Charlotte, as she is the only one in Clamburg that does not obey her, and she is annoyed by Charlotte's cheerfulness and constant singing. Due to Charlotte's cheerful nature, she never notices that Vendetta is evil or that she is trying to destroy her, nor that she actually hates her. Her careless, innocent personality makes her ignorant to everything evil.

A sad side of Charlotte was not seen until Maggie read a poem about a lost kitty, which caused Charlotte to fall into depression, and thus did not feel like singing.[6] However, using her creative imagination, she came up with a solution on how to save the lost kitty, and went back to being cheerful again.

As Charlotte is a child, she likes to pretend to be different kind of things. She has a fascination of cheese and sometimes pretends to be cheese, mostly gouda.[7] She loves everything in the world.

She almost always make up a song on the spot when something interesting is happening, such as when she is swinging or a song about Vendetta. She also likes to sing songs about such things as being small, No. 2 pencils and cheese.

In every episode, it is seen how Charlotte annoys Vendetta with her songs and happiness. Vendetta hates songs, and most of all, Charlotte. She always makes fiends for her, which Charlotte thinks are gifts of friendship. Somehow when Vendetta unleashes a fiend onto Charlotte, Charlotte always finds a way to make the fiend friendly. Vendetta often throws things at Charlotte, Charlotte always thinks that Vendetta is giving her these items. One instance when this occurred is when Charlotte brings in a rock for show and tell that she tells the class Vendetta gave her. Vendetta yells that she threw it at Charlotte. Vendetta is also often times attempting to kill Charlotte with various schemes and fiends. Charlotte usually thinks fiends are cute or just doesn't notice them. Vendetta rules over the gloomy town of Clamburg though Charlotte just assumes Vendetta is another person that lives in the town with no more significance other than being her best friend. She has no idea that Vendetta hates her.

As her pet hamster, Charlotte loves Buttons, calling him "her favorite hamster in the whole world" and is frequently seen playing with him with her toys. However, she unknowingly terrifies him at times, often treating him like a plaything and putting him in situations where he is danger of being attacked by one of Vendetta's fiends.

Charlotte as she appears the web series.

Charlotte and her grandmother, Charlene.

Charlotte on the bottom of the ocean.

Charlotte on a picnic.

Charlotte in the land of Cheese.

Charlotte on the moon.

Charlotte with her fiend: Mr. Huggles

Charlotte and her clones carrying Vendetta.

Charlotte and her parents.

Charlotte marching while she and Vendetta are stuck together.

Charlotte on her first day, seeing the Giant Cat fiend.

Charlotte in line for lunch

Charlotte holding one of the vegetable fiends

Charlene showing Charlotte one of her cookbooks

Charlotte about to serve her Beef Jerky, Clam, and Grape Punch cassarole

Charlotte is late for school

Charlotte pretending to be dead

Charlotte in the TV Series 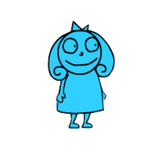 Charlotte in the web series.