Amy Winfrey is an artist and animator, residing in Los Angeles, California. She is the creator of Making Fiends and a voice talent for several characters.

Winfrey studied animation at UCLA and made a 3D film called The Bad Plant, which won her a silver medal at the Student Academy Awards in 2000. At UCLA, Winfrey worked as an animator on South Park during the first season. She took a break from the school to work full time on the South Park theatrical film. In a UCLA class, Winfrey made a website dedicated to traffic cones. Because of many visitors on the traffic cone website, Winfrey decided to create a series of short web cartoons, and the result was Muffin Films. When the 12 shorts were finished, Winfrey created another series, Big Bunny. In 2003, Winfrey created Making Fiends. Nickelodeon contacted Winfrey in 2004 about possibly bringing Making Fiends to TV. The television series premiered on October 4, 2008. 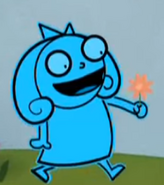