Aglaia Mortcheva is a Bulgarian animator, illustrator and voice actress, perhaps best known for her portrayal as Vendetta on the Making Fiends web series and on the television series.

Mortcheva was born and raised in Sofia, Bulgaria. At age six, she started working as a child actress and later became an artist at age fourteen. At age twenty six, she moved to Los Angeles, California, where she also currently lives with her husband.

She worked on shows such as Rugrats, South Park, and All Grown Up!. In 2003, Mortcheva was the voice of Vendetta on Amy Winfrey's web project, Making Fiends. The series was televised in 2008, in which Mortcheva was a character designer. In 2009, Mortcheva published a short film titled When I am Sad, which she wrote, animated, and provided the voice for the main character. 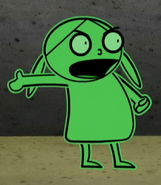